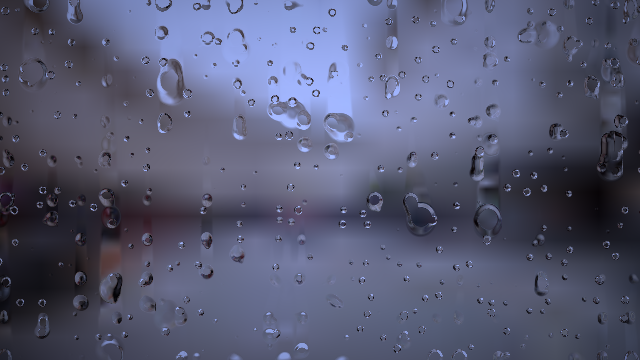 Today, let’s analyze the effects of raindrops, one of the most visible effects on Shadertoy. The code to analyze is ‘Rain drops on screen’. The comments in the code are meticulous, which helped me to analyze it. So let’s get started. 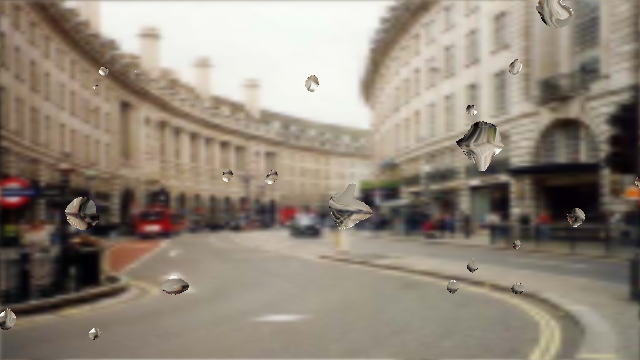 ‘Rain drops on screen’ by eliemichel

In Shadertoy - Fire Shader, I wrote that there are no random functions available for inline functions in shader, so we can use random values in two ways. The first is to create a random function like hash directly, and the second is to load a random texture. Let’s try the second method today.

Shadertoy offers a variety of input textures. They can be called iChannel0 ~ iChannel3. Here we simply call it texture0.

texture2D can also contain the third argument bias. This is the value added to the mipmap level when calculating the texture’s LOD. If there is no change to 0.0, and you uncomment line 9, 1.5 will be applied as bias and you will see that the image is blurred. The original codealso uses textureLod which gives you direct access to the LOD, but in the OpenGL ES 2.0 specification, textureLod is only available in the vertex shader(related link), we will not use textureLod here because this code is only used to blur the background image.

As mentioned earlier, you can also receive random textures as input.

The above code was created by referring to “Simple Texture Distort” by mikiex. texture0 used the landscape texture used above, and texture1 used a random texture. Using the r channel and the g channel in the texture1 random value, we change the uv value of texture0 to create a distorted effect.

So let’s get back to the original code. Line 8 in Rain drops on screen is as follows.

n is also vec2 n because the vec2 in line 7 is applied. iChannel1 is a random texture. u is uv. You can see this on the screen as below.

If you uncomment line 6, you can see that the original random texture is tight. Line 5 is interpolated using only a small area of the random texture, multiplied by .1.

This calculated n is used in raindrops. Note that if you change the value of .1 to 1.0 in line 8 of original code, or if you completely eliminate the multiplying part, you can see that the raindrops become very small. And on the contrary, if you multiply by a smaller value such as .001, the raindrop will be close to a perfect circle. We will explain why this happens in the next section.

Raindrops are calculated in the for-loop. When you comment out the for-loop, the raindrops disappear and only the blurry background remains. Let’s analyze each one from the first line of the for-loop.

In the third line, p takes the sin function and creates a value between -1.0 and 1.0. Let’s check these values in the shader.

In line 8-9 we divided p into two parts. Once you have output the p calculation results of the first term on the r and g channels on the screen, you can see that most of the values are 1 or more as expected when the screen is entirely yellow. If you uncomment line 9, there will be random changes on the left and bottom of the screen, but the screen is still yellow overall.

And if you change the r value from 1.0 to 4.0, which varies from the original for-loop, you can see that the grid gets tighter.

There is no clue as yet. We need to look at the code a bit more.

round is an inline function that rounds off, but is not supported by the fragment shader of three.js. If we use floor(a+0.5) instead, we can get the same effect. Let’s put this d value in the shader.

If we multiply uv by x, x is a large value, so texture1 will shrink and appear in a small area, and the other part will look like an image stretched. With -0.25 here, the original image will have slightly shifted right-up (uncomment line 8). If we then calculate floor(uv*x-0.25+0.5) to give the effect of the round function you see above, a large grid is created (uncomment line 9). But the same color is displayed in the upper right corner because the value of floor is more than 1.0. To prevent this problem, divide uv by x (uncomment line 10).

If we were to prepare the basic materials for raindrops beforehand, the latter will actually draw raindrops. First, we compute t, which adds s.x and s.y of s which we calculated earlier, and then multiplies the complex expression.

A complex expression guarantees a minimum value of 0 with max. Since d is a grid, d.b and d.g will have constant values over a large area. Let t be a shader.

When time came in, there was definitely a change. We can see that there is something like a raindrop on each grid and disappears. Since time is multiplied by the value from d, the raindrops on each grid appear and disappear for the same time. The shape of each raindrop is different because the s calculated above is an irregular shape. If we uncomment line 10, we will see a rhombus with no randomness.

This is because the cycle of sin is \(2 \pi\). If we keep 6.28 in line 9 and uncomment line 12, we can see that the raindrops are exactly half the grid. Line 12 is to translate the sin function, and changing line 6.28 in line 9 or 10 will change the sin cycle. The smaller the number, the larger the grid, the larger the raindrops, and the smaller the number.

Also, if we change .1 to n to 1.0 or if we change it to .01, we can see that the shape of the raindrop clearly changes. Because .1 is a number that determines how large the area is in the random texture, raindrops become fine with large areas, and random values almost disappear with small areas.

Now we have figured out the shape of the raindrops. In the code, this raindrop is displayed by probability.

The second condition is t > .5. t is the holding time of the raindrops. The only thing that leaves a value larger than .5 is that it will not display raindrops if the value is less than .5. Considering that the raindrops gradually diminish and evaporate quickly when they are below a certain size, this is a plausible implementation.

If we apply this condition and turn it around for-loop, we can see a more plausible raindrop effect.

The raindrops are overlapping to give a more wonderful effect. Only the specific raindrops are displayed by the first condition of the if statement.

So now it’s time to look at normal.

Shadertoy - Fire Shader briefly explained what normal is. normal is the direction vector of the surface from the center of the object to the outside. It is used to add detail of the surface and can produce a 3D effect.

The first two terms of v are x, and y is calculated as -cos(p). This will cause the cycle of sin(p) when making the shape of the raindrop to be different from \(\frac{\pi}{2}\).

If we compare sin(p) and -cos(p), we can see that the grid positions are shifted from each other.

So what is the relationship between sin(p) and -cos(p)? Let’s check with the shader.

If we print sin(p) value to r, g channel, the middle of raindrop will be yellow. That is, sin(p).xy value will show max value close to 1.0.

If we uncomment line 16, we can see the raindrops look more stereoscopic. Since sin(p) and -cos(p) are offset from each other on the grid, a black part with a value of 0.0 is also present.

We finally came to the last part. How do we print raindrops with normal like this?

u is uv. Eventually uv subtracts .3 from normal.xy. Let’s look at the shader to see if this simple implementation will work.

If we uncomment line 19 to apply normal, we can see raindrops, but they are similar to each other. This is because the coverage area of normal is too wide. If we uncomment line 20, you can see that the whole area of background texture0 is in one raindrop. In the 19th line, it seems to be inverted because we gave the -, and in the 20th line it gives the +, so the background is completely in the raindrop.

Lines 21 and 22 limit this influence by multiplying normal by .3. Try uncommenting and try experimenting with further narrowing or stretching this area.

This will finish the raindrop effect. Thank you for reading the long article.