In the previous article, we introduced concepts such as discount rate, value function, as well as time to learn reinforcement learning for the first time. The two concepts are summarized again as follows. 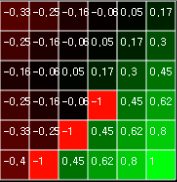 Figure 1. Calculate value functions for each state in Grid World

To solve this problem, it would be better to have a fixed size input that is not affected by the size of the environment. And we should use a more efficient algorithm to solve the problem.

First, let’s define the problem that corresponds to the dynamic environment. In this Grid World environment named ball-find-3, an agent and three balls are created at random locations. When the agent overlaps position with the ball, the ball disappears and agent receives a reward of +1.0, and one episode ends when all 3 balls are eliminated or 200 steps are reached. And every step gets a reward of -0.1. An agent’s action is to move one space in four adjacent directions. Here is an example of ball-find-3 where the agent picks random behavior.

The size of Grid World is 8x8. Theoretically, the highest point is to get all 3 balls in 3 steps and get a reward of +2.7, but this is very rare if you have a good luck, and if you usually get a small positive number or a negative number over -2.0, I think it can be said. Running an agent with a random action for 1,000 episodes gives you an average reward of about -14 to -17. Based on this, we will improve the average reward with various reinforcement learning algorithms.

In contrast, the Q function is a function that replaces a state with an action. The agents of ball-find-3 can move in four directions: up, down, left, and right. The Q function finds the value of this behavior for each state, and chooses the action with the highest Q value. This Q function is also called a policy. Q stands for Quailty and represents the quality of a particular behavior.1 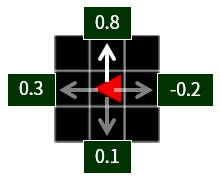 Figure 2. In this position(state), the upward movement of one cell has the largest Q function value of 0.8. The agent unconditionally selects the action with high Q function value, or selects with high probability.

The portion corresponding to the future value is the Q function value of the action(\(a'\)) that can be taken when the next state(\(s'\)) is reached by the action.

The discount rate applies to future values. Therefore, applying a discount rate to this equation multiplies \(\gamma\) by \(Q(s',a')\).

However, the \(a'\) action that can be done in \(s'\) state is 4 moves in 4 direction in case of Grid World. Considering that you want to find the largest of the four \(Q(s',a')\), max, you can further refine the expression.

Now we can see some outline. The goal is to make the value of \(Q(s,a)\) close to \(R + \gamma maxQ(s',a')\). That is, \(Q(s,a)\) is updated through reinforcement learning. The easiest way to think about it is to repeat several runs and get an average. The average of any value can be obtained by dividing the total data by the number of data. For example, when there are n-1 numbers, the average can be calculated as

When you want to add a new value and then try to average again, you can add all the existing values and divide by the number of data again. However, it can be transformed into the following expression.

The expression for averaging has been changed to add the difference between the new and previous averages to the previous average divided by n. At this time, \(\frac{1}{n}\) will become smaller as the number of trials increases. You can change this to a constant size number such as \(\alpha=0.1\). This \(\alpha\) is called the learning rate. By adjusting this value to increase or decrease according to the number of trials, you can lead to a better learning.

We will get a Q function for every state, all actions, as we did for the value function we looked at in the previous article. At first, initialize all to zero because there is no value at first. 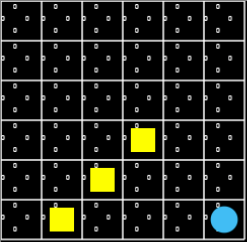 Figure 3. An environment with three pits and one target in a fixed location. Each state, Q function of each action, is initialized to all 0s.

Pressing the Step button moves the agent one step, pressing the Loop button automatically continues until the agent reaches maxEpisode. 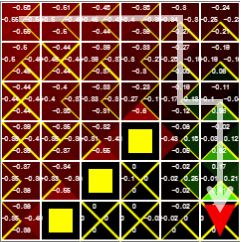 Figure 4. The agent can reach its goal by following the yellow triangle, which means the max Q value of each state.

In the fixed state, the optimal solution can be found by filling the Q table of the value of the Q function, that is, the \(state(s) \time behavior(a)\) size. In the Grid World above, \(36 \times 4 = 144\). But how do we cope if the size of the environment we considered is very large? 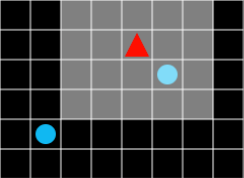 Figure 5. The field of view is bright.

Figure 6. A and B are treated differently.

Therefore, you can not save a Q function as a table, as you did above. One way to think about this is to use a neural network that effectively stores large amounts of data and turns that data into efficient function outputs. DQN came out at this point.

In Deepmind’s historical paper, “Playing Atari with Deep Reinforcement Learning”, they announced an agent that successfully played classic games of the Atari 2600 by combining Deep Neural Network with Q-Learning using Q functions. Especially in some games, DQN has become more talked about because it gets scores that surpass human play.

Figure 7. The agent learning with DQN is playing Atari-breakout. The agent learns for himself and finds the best solution for sending the ball to the back of the block line. Source Link

This algorithm receives a game screen corresponding to 4 consecutive frames as an input of the Convolution network, and then learns a Q function that maximizes reward through a Q-learning process. Just as a person plays the game, the agent will play the game with the appropriate keystrokes at the given screen. 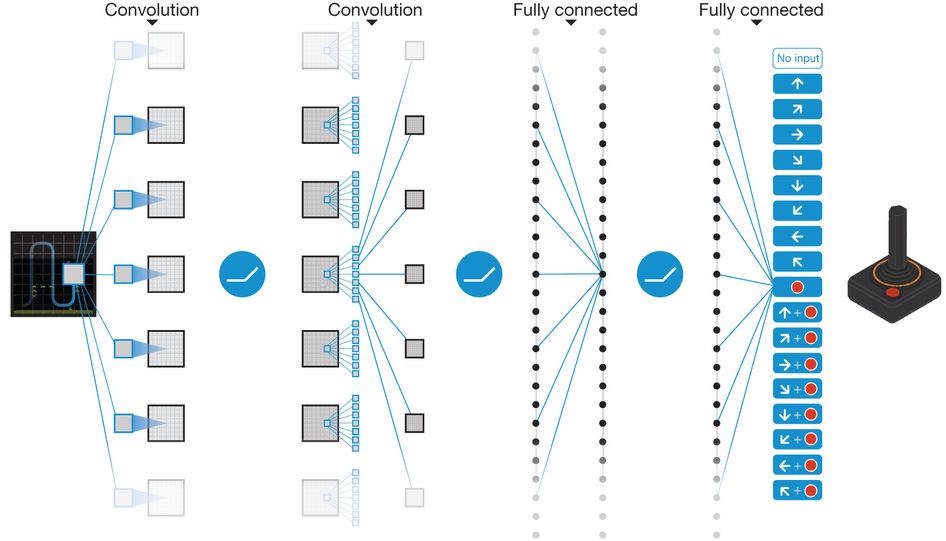 In addition to the basic idea of ​​replacing the table of Q function with the network, the DQN thesis includes ideas such as experience replay and target network to improve performance. It would seem to be beyond the scope of this article to elaborate on these, so if you are interested, this article will be helpful.

Let’s implement DQN in Grid World environment. We will use tensorflow-js as the Deep Learning library. tensorflow-js is a javascript version of tensorflow, the most widely used deep-running framework in the world today. It is compatible with tensorflow on model, and supports concise API usage that is affected by keras.

The network structure we use is simpler than Figure 8. After receiving the input corresponding to the view of the agent, it compresses the image information using the convolution layer and captures the feature. Then connect the dense layer and finally connect the dense layer with four nodes equal to the size of the action, and use the output of the network as the agent’s action.

When you press the Learn (DQN) button, the agent starts learning. Since the experience replay is applied, the agent stores all the information it experiences in memory in the form of (state, action, reward, next_state, done), and starts learning from the time when a certain number of information (train_start=1000) accumulates. Each time 10 steps(learn_step=10) passes, we use 64 samples(batch_size=64) extracted from memory.

When I study up to 2000 episodes, the average reward is -11~-12. This is an improvement over the -14~-17 of random action agents. We can try to adjust the hyper parameters of the deep running - train_start, learn_step, batch_size, etc. and get a better average reward. We can also modify the network structure or apply a more advanced algorithm (A2C, PPO, etc.) to increase the average reward.

With a limited field of view, we have found that DQN agents can outperform random action agents in relatively difficult problems where agents and balls are created at random locations. However, it seems that the ratio of going straight to the ball and going to the other side is similar. Next time I will explain how to make this agent more efficient, and more efficient algorithms to solve the more difficult problems. Thank you for reading the long article.